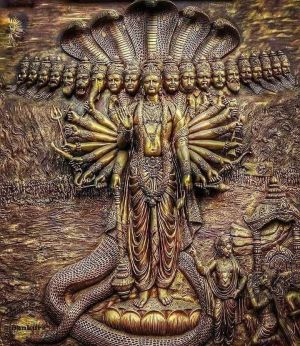 Is every event in your life including your birth and death divinely preordained? Does that mean you don’t possess any free will to change such a destiny? Are you just a puppet in the hands of some unknown cosmic power? What about the good deeds that you perform in this birth? What is the effect of devotion to god, the various pujas you perform, mantras and stotras that you chant? Are they powerless to militate against any adverse eventualities? Before we start looking up an answer to this existential question, let us first find the source from where this very question arose.

Bhagavad Gita Chapter 11  “Vishwa Roopa Darshana Yogam” – The Yoga of the vision of the cosmic form of God.

In this chapter Arjuna asks Krishna after getting awed at the Vishwaroopa, “Who really are you?” and seeks elucidation for all the weird visuals he witnessed in the cosmic form. “I see all the sons of Dhritarashtra, along with their allied kings including Bheeshma, Dronacharya, Karna, Salya etc.,  all the generals and the multitudes of soldiers from both sides rushing headlong into your fearsome mouths. I could see their heads smashed between your terrible teeth! But they are all still alive in front of us.”

Arjuna perhaps thought that Krishna was playing some magic tricks on him by showing fake imagery. Now let us look at the answer that Krishna provides to those questions. Krishna starts by describing himself as the veritable destroyer of the world – “Kālaḥ asmi” and added that a massive destruction was going to take place and Krishna was going to execute it by proxy through Arjuna!

An ocean of humanity was annihilated in the 18-day Kurukshetra war. Yes, 166 crores of men (all men, mind you!) pwrished with a handful remaining alive. It was a holocaust of gargantuan proportions! May be all those “astras” that find mention in the epic were very efficient weapons of mass destruction! (I wonder what became of them later!) Hence Mahabharata is termed as a “Doomsday Epic” by Prof. P. Lal, a renowned Mahabharatha researcher and translator.

But Krishna justifies this genocide of such a magnitude stating that he had already finished the job of killing them in principle since their end was per-destined. And that Arjuna was a mere tool. He was given that opportunity to be an instrument in this destruction and enjoy fame and glory of winning the battle, though it’s all a staged act. The following verse in Gita (11-33) says this:

“Therefore, arise and attain honor! Conquer your foes and enjoy prosperous kingdom. These warriors stand already slain by me, and you will only be an instrument of my work, O expert archer (Savyasachin = ambidextrous archer).”

The operative line is “निमित्तमात्रं भव” (Nimiththa mathram bhava) which means “You are only an instrument”. That is a conclusive statement by Krishna that the fate of human beings have been pre-determined as per the Karma (Prarabhdam) by a superior cosmic force who is maintaining a database of the good and bad deeds of humans over their various births.

Is it not summarily a fatalistic view?

Look at this verse composed by some fatalist:

Meaning, neither lord Vishnu, nor lord Shiva, nor Brahmadeva nor any other devatha will be able to erase/change what is written on your forehead (தலையெழுத்து).

This is the way many people look cynically at their lives. Astrology claims that our Karma (Prarabhda) is indicated by the planetary positions at the time of birth that are depicted in our horoscope. So everything that happens in our life is predestined!

To accept that every action of ours is as per God’s wish and as a consequence of our own deeds in the past births, isn’t it a logical fallacy (or self-contradictory)? Where is the question of our accumulated Karma, sins or Prarabdha, when no action has been committed by us in any birth by our own free will?! God is the veritable doer or Karta and we are mere puppets in his hand!

This is not the only verse which denies the free will. In 2nd chapter too (Verse 47) Krishna says “karmaṇyēvādhikārastē mā phalēṣu kadācana” meaning you have a choice over action alone; never over results! This is bizarre since there can be no action without effect. Every action is performed by a living being either by instinct or by choice only aiming at a result. So this dictum that you have no right, control or authority over the result of your action is against nature. At best it can be said one doesn’t possess full control over a desired result since there may be so many extraneous factors that would come into play which may influence the outcome. But by employing the term “Never” (kadhachana), Gita delivers an emphatic averment (not a postulate) that the benefit should not be a cause for action!

This fatalistic view concludes that everything is in the hands of Bhagavan Krishna only and he decides the outcome of all efforts by all humans and all must surrender to him to get a positive result! The fundamental principles of cause and effect have no role here!

Is such a destiny-oriented view correct? Do all our scriptures iterate such a fatalistic conclusion? Our Dharma Shastra talks about “a-karta, a-bhokta” approach. To wit, you must perform your actions thinking that you are neither the doer nor the enjoyer of the fruits of your actions. Then who is the doer and enjoyer? The God! How is it possible to set your mind that way? May be it was possible to the yogis of yore (not the self-styled ones that you find around you!).

Fatalism is the alibi of the weak and imbecile. It’s impractical to say the least. 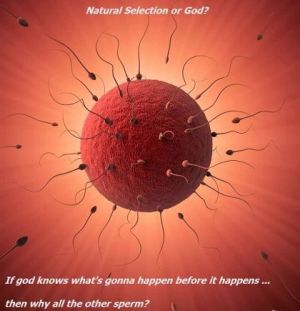 All this will look ok only if you look at Gita as a text of hagiography and not as one of practical code of ethics.

2 thoughts on “Fatalism or Free Will?”

I could have been an Egyptologist, but mummy objected.
I wanted to be a mathematician, but I had too many problems.
Alternately, I wanted to become a mid-wife, but the labor pained me.

"If I don't seem as depressed or morose as I should be, sorry to disappoint you."