I had written earlier about the mention of Ramanujan in the Hollywood movie, Good Will Hunting. This mention has now “piqued” a national award-winning film director Gnana Rajasekaran to make a biopic on the great mathematical genius, Ramanujan, as reported in The Hindu.

It is learnt that the movie based on the life and times of the mathematical prodigy, Srinivasa Ramanujan is likely to be released in September, 2014. It will be made in English & Tamil and may get dubbed in Hindi as well as other Indian languages.

This is what Mr. Gnana Rajasekaran, the director of the movie has to say about his inspiration to do the biopic on this Man who knew Infinity:

“Ramanujan was not only a mathematician, but also a genius of the highest order. His genius was not acknowledged by society; instead, he was pushed to pursue a normal path. His abnormal interest in mathematics was seen as a problem by the academia. What does society and academia do to a man who chooses to pursue a path less travelled? Ramanujan’s life is an answer to that. His life story is relevant to the society today”

The events in the life of Ramanujan took place mostly in Kumbakonam and a for a small part at Chennai (Madras, as it was called). But it was Cambridge which brought his mathematical genius to the limelight. The film features Abhinay Vaddi (son of Gemini Ganesan and Savithri) as Ramanujan. The others in the cast are Malayali actress Bhama, Suhasini Mani Ratnam, Abbas, Nizhalgal Ravi, Delhi Ganesh, YG Mahendran and Sarath Babu, and British actors Kevin McGowan (as Prof. G.H. Hardy), Michael Lieber and Richard Walsh.

Hope the movie will not fall into the trap of usual mutilation of the true story to fit the filmy paradigm but would do justice to the great wizard!

Here are a few shots of Ramanujan’s vintage abode and those who influenced his life: 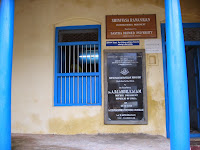 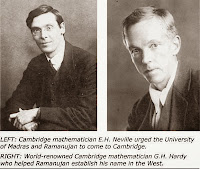 Internet is rich with resources on Ramanujan. The Hindu has an album archive and there is a Ramanujan Museum too containing chronological data on his life and times with a liberal dose of rare pictures.

Drinking problem: 2 hands, but only one mouth!