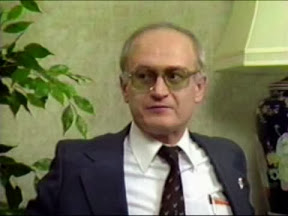 Yuri Alexandrovich Bezmenov (Russian: Юрий Александрович Безменов, also known as Tomas David Schuman; 1939 – 1993[1]) was a journalist for RIA Novosti and a former PGU KGB informant from the Soviet Union who defected to Canada.

After being assigned to a station in India, Bezmenov eventually grew to love the people and the culture of India, but at the same time, he began to resent the KGB-sanctioned oppression of intellectuals who dissented from Moscow’s policies. He decided to defect to the West. Bezmenov is best remembered for his pro-American, anticommunist lectures and books from the 1980s.
(Courtesy: Wikipedia)

If you find what Yuri Bezmenov talks about mind control, ideological subversion and social conditioning in this video is what is happening in contemporary India, well, you are on the dot!

How To Brainwash A Nation

One thought on “Four stages of subversion”

Can it be a mistake that “STRESSED” is “DESSERTS” spelled backwards?

When the government bureau's remedies don't match your problem, you modify the problem, not the remedy.