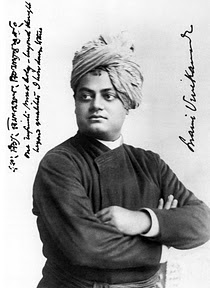 It is because of a dynamic follower or a disciple. Take the case of Ramakrishna. The world came to know of him only due to Swami Vivekananda. It was Vivekananda who founded the Ramakrishna order comprising of the Math and the Mission. He organized them after the passing away of Ramakrishna in 1886.

But for the joining of the dynamic and influential Vivekananda aka Narendra Dutta as the disciple of Ramakrishna he would have been just another mystic nut!

Derec Sivers has an interesting insight to this tipping point of the first follower who makes the leader what he is.

Listen to Sivers expounding his theory of Leadership:

I don’t like to be reminded that I was once inside another person!