Procrastination is the action of delaying or postponing something. For a few, it assumes a serious proportion of a syndrome! 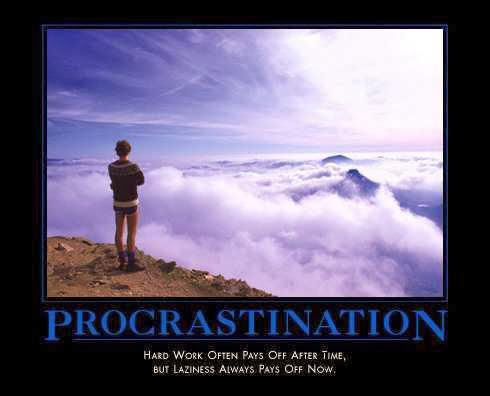 There is an earlier post on procrastination. This is my second one.

This is how wikipedia describes procrastination:

Procrastination is the deferment or putting-off of an action or task, usually by focusing on some other distraction. It is Latin for “foremorrowing,” or making some such of tomorrow.

The allure of putting off an unpleasant task is pervasive in our society, a fact which has given rise to jokes and cliches such as “never put off until tomorrow that which you can put off until the day after tomorrow”. Procrastination can be as benign as waiting until the last minute to file one’s taxes, or never cleaning out the garage. But procrastination can be a persistent trait in some people, known as chronic procrastinators. In these people, it can be a self-destructive state where the procrastinator can get nothing accomplished on time, resulting in serious career struggles, persistent financial problems, and diminished quality of life.

Here is a quote:

Procrastination is the fear of success. Because success is heavy, it carries a responsibility with it, it is much easier to procrastinate and live on the “someday I’ll” philosophy.
~ Denis Waitley

But IMO, it can be a fear of failure too.

There is also a Murphy’s Law which goes like this:

Do not try to do today what you you can do tomorrow, since it may prove to be unnecessary tomorrow.

Here is a set of Wikiquotes on procrastination.

2 thoughts on “Procrastinate and perish”

Humility is no substitute for a good personality.